Please respect every perch that you have the good fortune to catch. Today’s small perch could grow into tomorrow’s monster so even the smallest fish demands careful unhooking and handling. Respect all fish regardless of size or species.

Small perch can be lifted from the water on the end of your line and swung to hand. When doing this, always ensure the fish is kept above but close to soft ground, just in case the fish wriggles off the hook. Any fish above a few ounces in weight should be landed using a landing net. Once the fish is in the net, ensure the net is secure and leave the fish in the water whilst you organise yourself – for example, by wetting your unhooking mat, getting your weighing scales and sling or bag and setting up your camera. 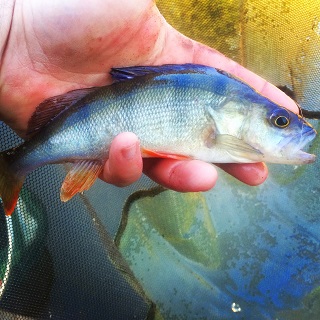 When handling any fish including small ones, always wet your hands first. Some people worry about being hurt by the dorsal fin of the perch but this is easily avoided. Simply place your hand near the head of the perch with your palm just above the dorsal fin. Then slide your hand down and grasp the perch gently but firmly. These actions will fold the fin down. Do not use a cloth to hold any fish because it will remove the protective ‘slime’ that covers it. For larger fish, always use an unhooking mat spread on a soft, flat surface, rather than on uneven or hard ground. Mats, nets, slings and bags must all be wetted before use.

When handling a fish that is to be released, be gentle. Don’t squeeze the fish or put your fingers in its eyes or gills since this increases mortality.

Do not leave it the fish unattended as it may ‘flap’ around on the ground and damage itself.

For small and medium sized perch, hold the fish firmly but not too tightly. For a larger fish, lay it on your unhooking mat and use one hand to stop it moving about.

The best approach is to unhook the fish in the water. However, most anglers either hold the perch or lay it on an unhooking mat to unhook it. Unhook the fish with forceps or your fingers if the perch is hooked in the lips or scissors.

Barbless hooks significantly assist with the unhooking process so always use a barbless hook or squash the barb on a barbed hook by using your forceps or pliers.

For a deep hooked perch where the hook is visible, you should use a disgorger, but please know how to use it correctly. If you cannot see the hook or you are unable to quickly unhook the perch, cut the line or trace as close to the perch’s lips as possible and release immediately. In perch, the heart is very close to the back of the throat and it has been shown that fish are much more likely to survive if left to shed the hook naturally, especially if you use a barbless hook. Never pull hard on the line.

Minimise the time the fish is out of water and handle it as little as possible.

Select exactly where you want to photograph your prize, considering the background, sun direction, etc. Use the unhooking mat or sling to transport the fish. If you are going to do ‘self takes’ you may want to place the fish back in the water in your landing net whilst you sort out the camera settings.

When holding a fish, support it properly and keep it close to the ground, over an unhooking mat. Never stand, as dropping a fish could cause it severe damage. The Perchfishers don’t recommend the lip grip (see specific comments on this grip).

Jaw holding of perch without support of the body

Whilst no specific research has been done on the effects of this method of holding perch, some scientific evidence exists on the effects of jaw holds, especially with boga grips on other species. The most significant research was done on Barramundi (Gould & Grace, 2009), where damage to jaw membrane in the mouth was found along with the more serious evidence of long term damage to spinal alignment when the fish were suspended vertically by the jaw. Boga grips with the body supported caused less jaw damage and did not cause spinal displacement. The Perchfishers do not have a rule about handling fish, however based on the present data, the Perchfishers Group stance on jaw holding of perch vertically is that it is advisable to avoid it, especially on fish of a size that require a landing net, as the negative effects of this activity are unknown. The body of the perch should be given as much support as possible while out of water.

We don’t recommend the use of keepnets to retain perch but if you choose to do this, use a fine mesh net of a good size to avoid damaging the perch’s fins and don’t place too many fish in the net.

If you use a keepnet, retain fish for the shortest time possible. Once positioned, avoid all unnecessary disturbance. Do not slide or tumble fish down the keepnet.

Small fish can be returned to the water by hand. For larger specimens, transfer fish back to the water in a sling, net or enclosed mat, never carry them in your hands and they could wriggle out and fall to the ground.

You can return a fish from the net without handling it. Place the net in the water, ensure that the fish has recovered sufficiently to hold itself upright and to swim away. Simply withdraw the net beneath the fish leaving it free to go.

When releasing a fish by hand, support it carefully in the water, facing upstream (if in a river), until it is ready to swim off naturally. Never drop or throw fish back into the water. Release it gently and head first. A fish will often swim away on its own. If it doesn’t, hold the fish gently in front of its tail and slowly move it back and forth to push fresh water over its gills. Release it when it begins to swim away. 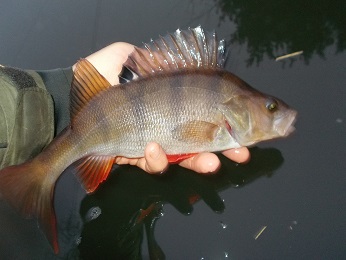 The correct way to return a perch

Releasing a fish doesn’t guarantee its survival, but careful handling can reduce the stress on fish and gives it a better chance to live and reproduce.

Now a word about deep water fishing which presents some specific challenges regarding perch welfare.

Consider water depths when fishing for perch. Perch have a reduced chance of survival if they are caught in water deeper than seven metres, brought to the surface, and then released. When perch are caught in deep water, their swim bladders can’t adapt quickly enough to the change in atmospheric pressure. This causes the fish equivalent of ‘the bends’. The internal damage that results will likely kill the fish. To minimise this, bring your fish to the surface slowly, allowing it time to for it to adjust its swim bladder and expel air. Do not quickly crank the fish to surface. Minimise the time the fish is handled and ideally unhook the fish in the water for a speedy return. In situations where there is a desire to weigh and photograph the fish, ensure you have all equipment to hand to do this as quickly as possible.